Troy "Luckie" Nunez was born in 1980. Luckie spent his entire childhood in Hopkins. With 9 siblings, Luckie is number 5 of a family of 10 children. As a boy growing up he was the salesman of his family selling produce from the farm or pastries to help support the large family.

In 1993 he moved away from the coast to the capital city to live with his uncle who was better able to assist him to attend high school. Whenever he got a break to go back to Hopkins for a weekend, Luckie was sure to take advantage of the opportunity to be in the sea where he spent most hours of his days in the village.

After finishing high school and spending 3 years in the Belize Defence Force, Luckie returned to Hopkins village where he started working in the tourism industry as a front desk clerk at a resort. While there he was allowed time off to take courses in diving and tour guiding. He attained his Belize tour guide's license as well as PADI Divemaster certification in 2003. In the beginning of 2004 he attended an Instructor Development Course and became a certified PADI Instructor on February 8, 2004. Since then Luckie has certified more than 1000 divers and has done more than 3000 dives (Nov. 2010). During his Divemaster Training Luckie vowed to his Instructor that he would be one of the best dive guides in Belize. 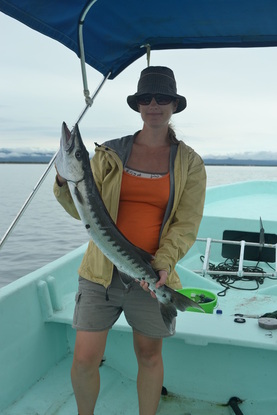 Cheryl Rowland-Nunez grew up in Canada and moved around in different parts of Western and Northern Canada during her life there. She always had a passion for travelling and the outdoors and turned that passion into a degree in Ecotourism when she attended Mount Royal University in Calgary in 2006. She decided to do an international work term in Belize in 2008. After her work was done she did a bit of exploring around Belize and discovered the village of Hopkins and met Luckie. She loved the cultural and relaxing atmosphere in Hopkins and she and Luckie hit it off well so she stayed a little longer.

After returning home, Cheryl and Luckie maintained contact and after a year a plan was hatched to move to Belize and finish the last part of the degree by correspondence. Cheryl moved to Belize in 2009 and has been here ever since. Shortly after moving she and Luckie started dreaming about their own business and after gaining some Belizean experience running tours on a catamaran, managing a small resort and various other jobs, Happy Go Luckie tours became a reality in 2012.
Proudly powered by Weebly